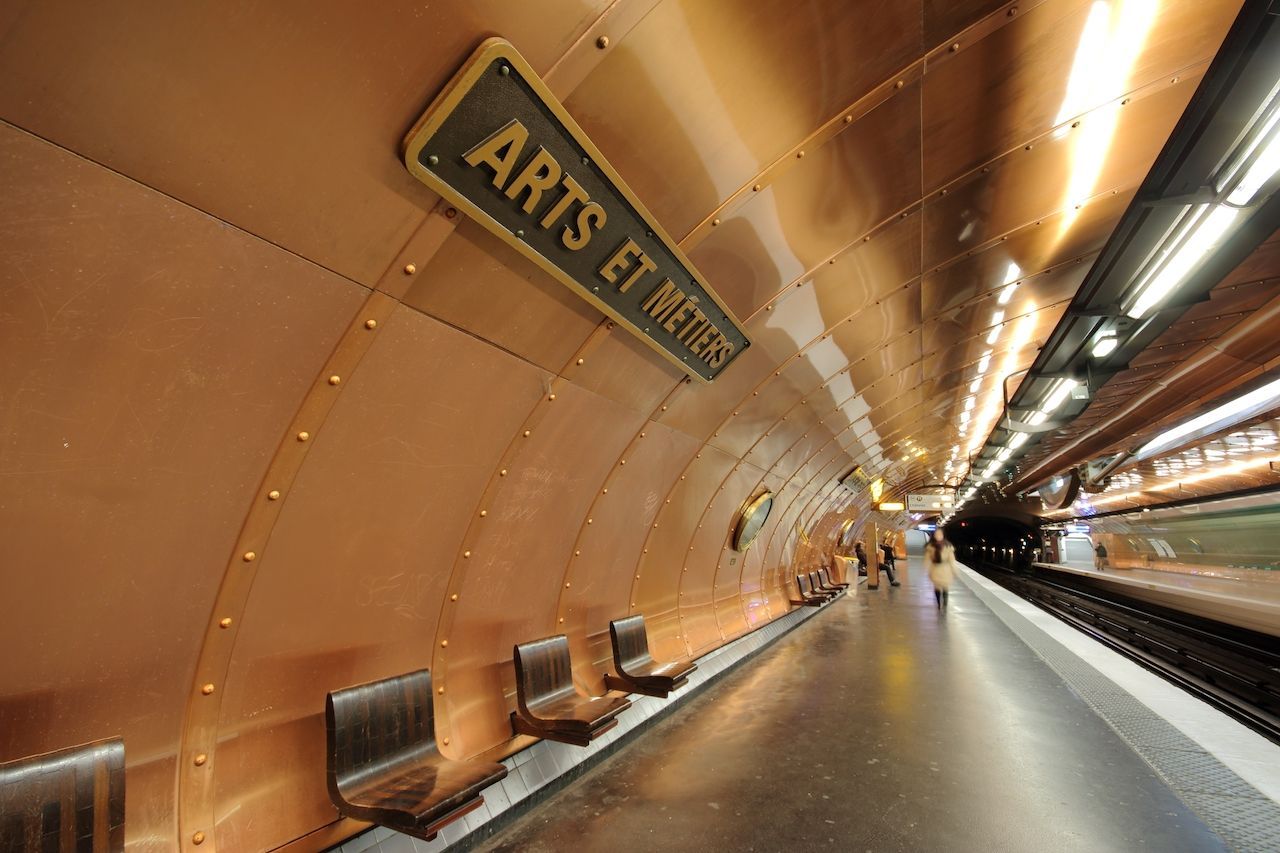 Paris is one of the most beautiful cities in the world for many reasons.  Starting with the beauty of the Hausmanian architecture, the old streets of Le Marais, and the magnifient monuments that you will discover along the way– there is beauty to be discovered everywhere in Paris. While it is a modern city, it has kept this indescribable feeling of belonging to a different century. The boat shaped area around ‘Ile de la Cité, is breathtakingly beautiful. Notice the ‘Conciergerie’ that resembles a medieval castle, or the gorgeous ‘Saints Chapelle’ nearby.

Of course, the best way to travel within the city is to use a taxi or a private car company. However, if you are looking for a ‘Working Parisian’ experience, you will soon discover that the parisian metro railway hides many secrets under the scenic streets.  Here ’s a list of some of the most unique metro stations to explore while visiting. Enjoy !

The line 1 that crosses Paris from East to West, is the main touristline and stops near all the major tourist spots. It should be no surprise that the Franklin D. Roosevelt station,  situated directly upon the Champs Elysée, has been decorated in grand style.  The traditional white metro tile has been replaced with gold tiles and works of art adorn the walls. It is perhaps a little over the top for experts, but well worth taking a look !

The Cite station was opened in 1910. It is located at a depth of 20 meters underground so the tunnel can pass under the Seine river.  A special  green light is used to illumitate the space.  The station has a single access that opens at No. 2 Place Louis Lépine. The station was previously connected to the nearby police headquarters, and the courthouse is located a hundred meters from the current access. These underground tunnels were notably used to escape the Germans during World War II.

This Metro stop belongs to the newest automatic line 14, and was opened in 1998. Looking up, it has the highest ceiling for a metro in Paris, about 15 meters tall. On the way to the Opera, take a stop at ‘Gare de Lyon’ on line 14, there’s an exceptional exotic greenhouse garden where sprinklers maintain an humid and tropical atmosphere.

On line 11, the station is covered with decorative copper plates .This stop was designed on the occasion of the bicentennial ceremony of the  « Conservatoire National des Arts et Métiers ». A traveler is immersed within a vast machine, like an underground Nautilus, evoking the atmosphere of Twenty Thousand Leagues Under the Sea. A series of large wheels evokes the Museum of Arts and Crafts above on the roof. The Copper material  recalls the technical and industrial universe. On the quays, a series of portholes open onto small stage designs centered on the museum’s collections of arts and crafts.

Looking for something historic on your journey ? On the Ligne 12, the metro stop Concorde was redesigned by Françoise Schein in 1991. The walls are now made of white céramique with letters written on each tile. The creation represents the ‘ Déclaration of Human Rights  set  in  1789.

This station is currently under maintenance. Lord knows what sort of upgrade they are going to give to this iconic spot! It used to be decorated with grandiose statues and paintings! Watch out!

On the line 1, on the station platform towards Bobigny, foundations of walls from the former Bastille prison can be found. These echoes of history were discovered during the construction of the line in 1905. Yellow lines drawn on the ground mark the contours of the building. The station also presents various views of the ancient fortress.

The Cluny Sorbonne station opened in 1930. Considered too close to other stations, it was closed between 1939 and 1988. It was reopened to allow connections between the RER lines B and C, and the Saint-Michel- Notre Dame station. The ceiling of the station was decorated for the reopening in 1988 with mosaics by Jean Bazaine featuring signatures of famous students from the Sorbonne. It has the particularity of having three metro lanes, the center lane without a dock, being the connection to line 4.

I hope this post will pique your curiosity and you will take a look at these wonderful metro stops. Sumptuous Events, your luxurious destination wedding planner in Paris.

1. Mandarin Oriental If you are looking to celebrate your wedding high above the iconic New York skyline, the five-star luxury Hotel Mandarin Oriental is the ultimate solution in terms of service, comfort and style. […]

Guide to Propose Your Girlfriend

Are you deeply in love with your girlfriend but you have no idea on how to propose? Is this because you fear that you might be rejected, or because you want to be original ? […]