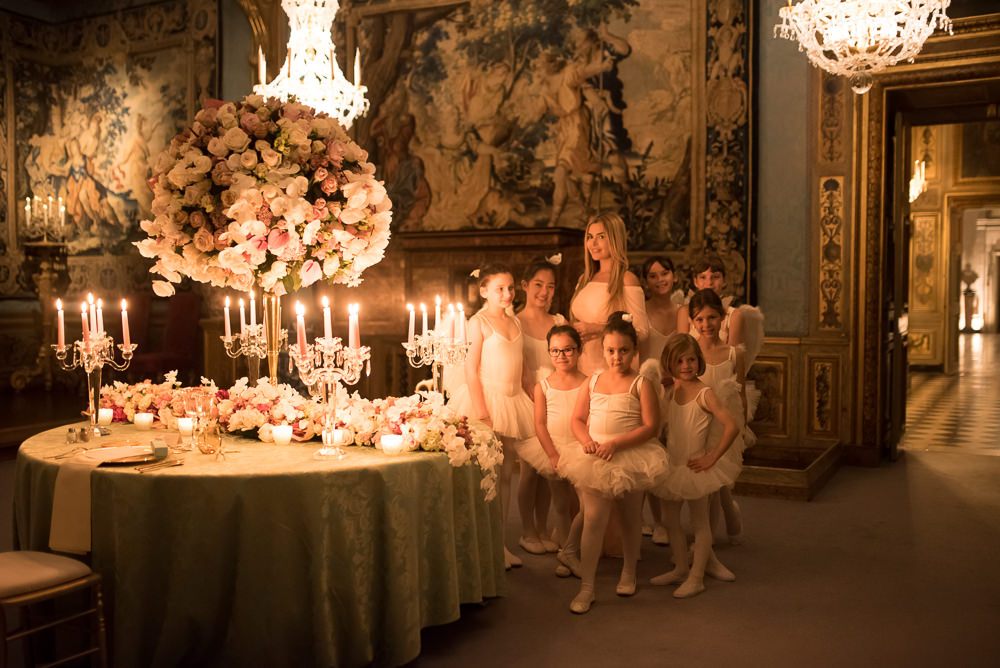 There are some secrets that shouldn’t be kept for too long! It especially holds true for showing the magnificence of the events we produce. Therefore,  we are extremely proud to present you one of the most incredible proposals we have ever had the honor to organize, a royal proposal at the ‘Chateau de Vaux le Vicomte’ .

Initially, Mister M. wanted us to prepare a royal wedding for himself and the woman he was deeply in love with. However, we soon realized that he didn’t even propose nor they got engaged! Hence, our suggestion was to start with a splendid proposal, before, together with a bride-to-be, we proceed to plan the majestic destination wedding in Paris. From the first moment, we were perfectly aligned with Mister M. and decisive to create fabulousness together.

Thus, we searched for the most astonishing Castle around Paris, and finally ended chose the iconic Vaux Le Vicomte. It was constructed in the period from 1658 to 1661 for Nicolas Fouquet, Marquis de Belle Île, Viscount of Melun and Vaux, and the superintendent of finances of Louis XIV. This château represents one of the most influential pieces of architecture of mid-17th-century Europe. 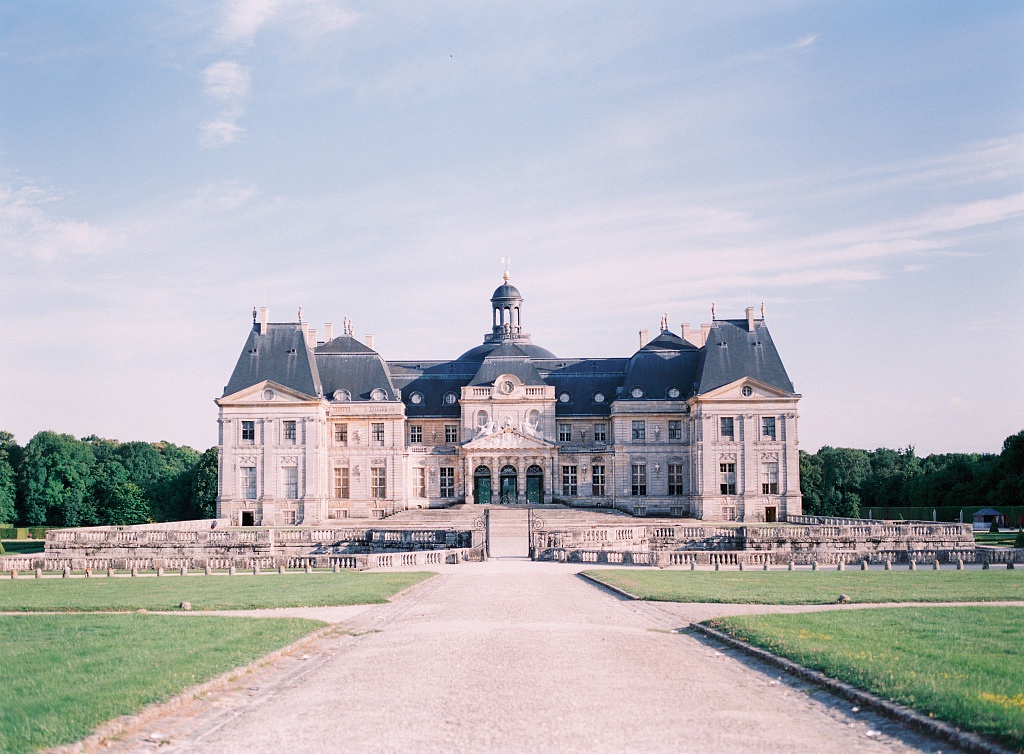 Here is the scenario we prepared. It was a sunny afternoon in July, and Miss L. was being pampered in her room. She was wearing a magnificent pink tunic, when the door bell rang. It was Mister M. to pick her up. The amazing photographer Audrey, founder & owner at le Secret d’Audrey, & the talented Chris Nemes, from Zen Film Work, were ready to capture the unfolding of the most beautiful memories.

When Miss L. climbed down the stairs, none of us was able to withhold our emotions. The luxury car was waiting in the front, and a private driver opened the door for Miss L. After stepping inside, she discovered a beautiful bouquet & a black envelope with a calligrapher message from Studio French Blue – ‘Follow Me.’ At this point, she realized that something special is going on and the atmosphere started to be a little electric and very romantic. 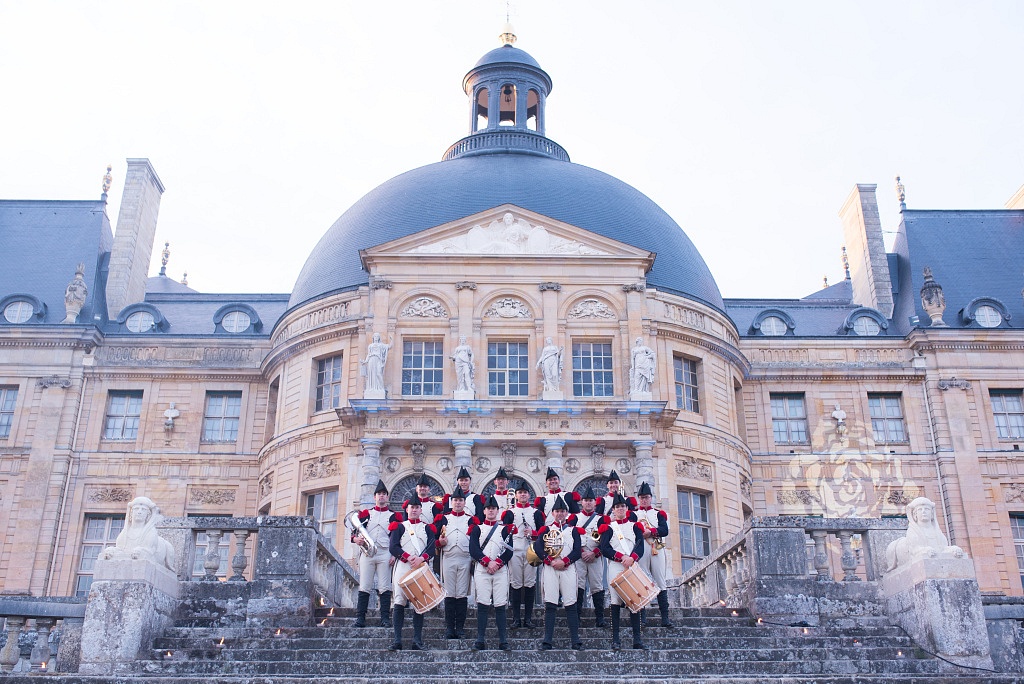 After a short drive, they arrived at the Heliport for another spectacular surprise. The surprise waiting for them was a private helicopter tour over Paris for only two of them. During one hour, they discovered the most symbolic attractions of Paris, Trocadero, Eiffel Tower,  and Notre Dame de Paris, and then headed south to fly over the sumptuous Chateau de Versailles and its French garden designed by Lenotre.

Meanwhile, the other part of the Sumptuous production team was checking the final details on site at the Castle to ensure that everything is perfectly synchronized. There was a lot going on: lights messages & floral patterns on the facade, thousands of candles to light the entire garden, red carpet, and most importantly, a grand rehearsal of 30 artists, dancers, and musicians. The view was so magnificent that Mister M. asked the Helicopter Pilot to fly over the Vaux le Vicomte Castle a few times to thoroughly enjoy it.

Then, they landed together exceptionally in the Jardin d’Hercule, where one of the most flamboyant golden statues stands at the very end of the garden just to see a Rolls Royce Phantom waiting for them to let them a precious moment of privacy while escorting them to the central fountain of the Garden. 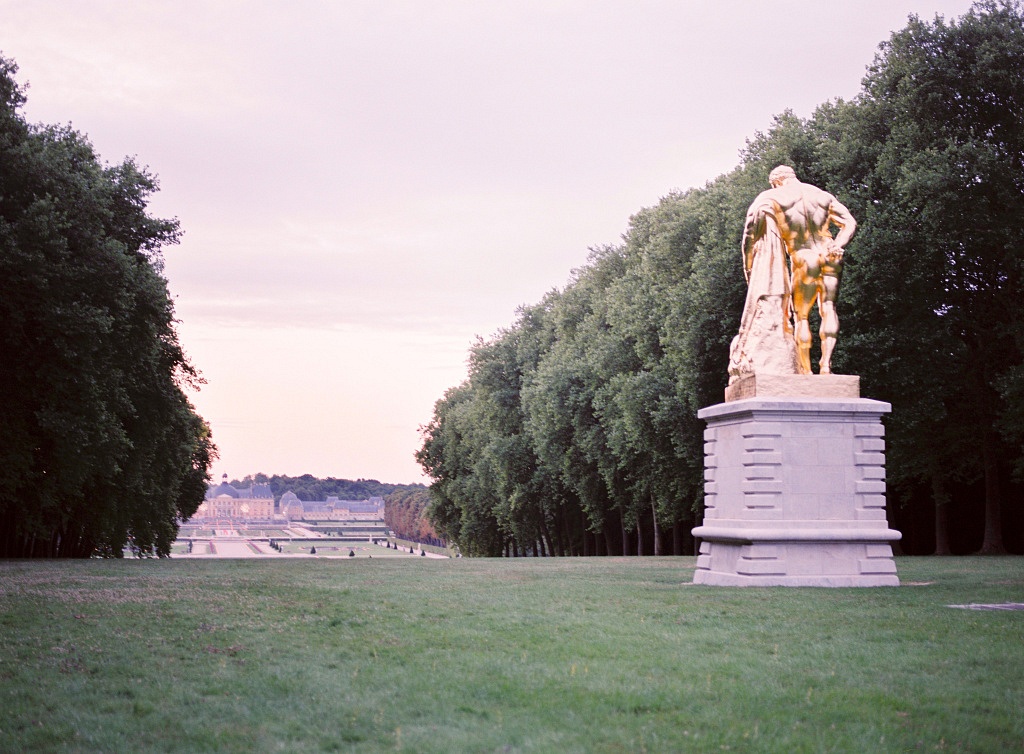 Another surprise was waiting there! A French Fanfare, in a military style, dressed up as Napoleon Officiant, played their welcome number. Thousands of candles illuminated the candles and the grand red carpet the couple walked on. The music was gorgeous and powerful, and the entire scene was beyond fantastic. Then, upon the arrival to the entrance of the South Facade of the Castle a classical orchestra was waiting for them, facing the magnificent garden. It opened the ball with ‘Viva la Vida’ by Coldplay. 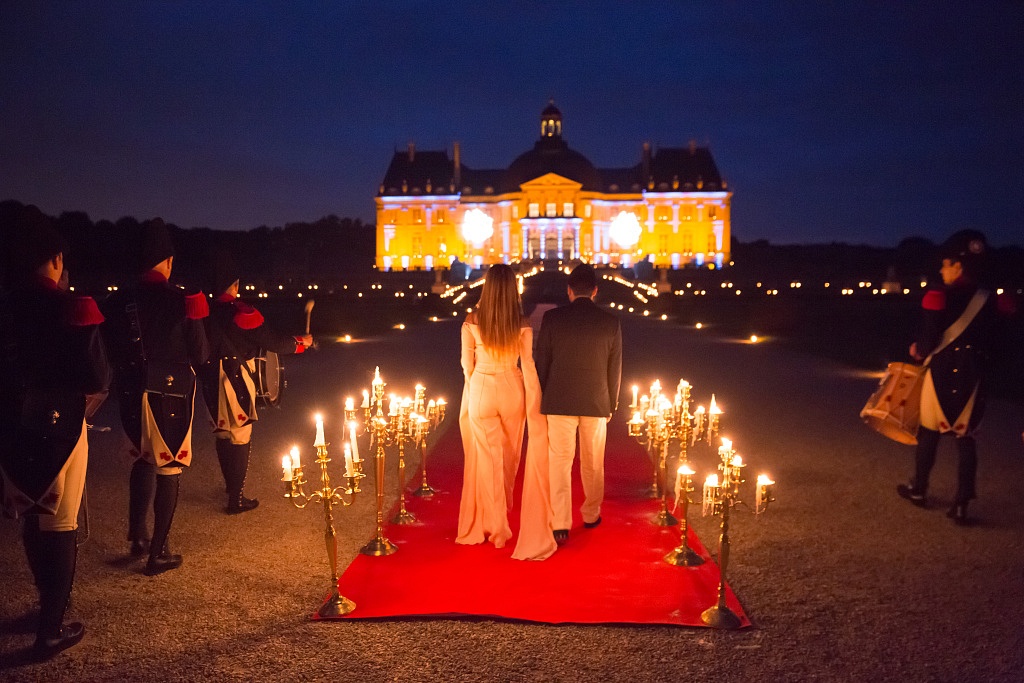 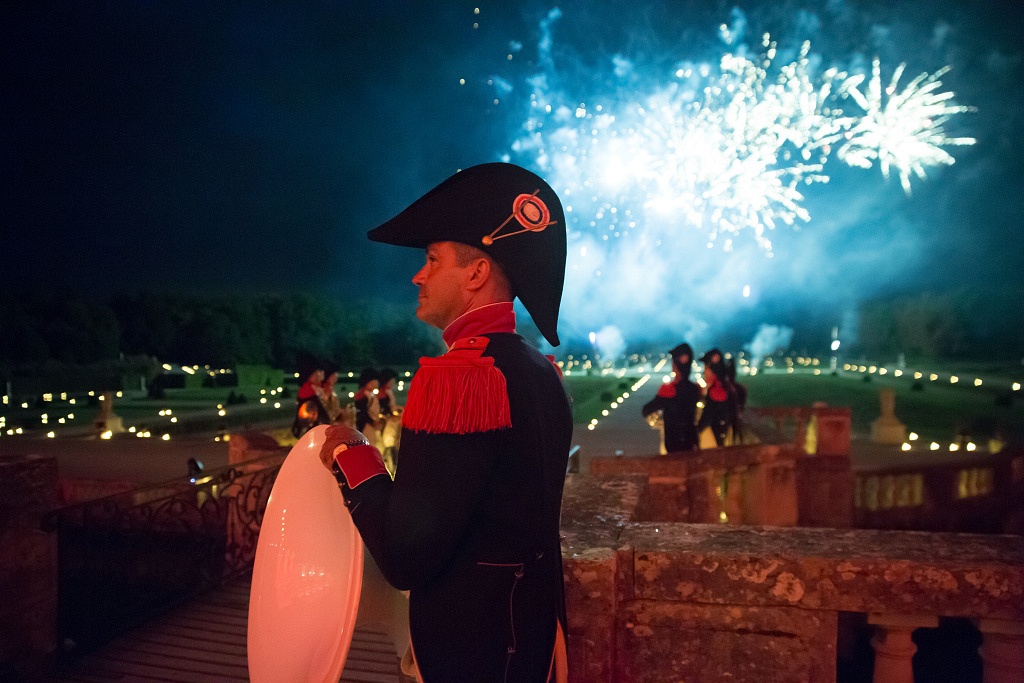 At the very same moment,   little girl dancers dressed as angels appeared on the stairs with red roses their hands and performed a choreography. Again, it was beyond our control to hold our emotions, because the magic we had envisioned was unfolding here, right in front our eyes! The little girls circled the couple, and the orchestra started playing ‘ The Blue Danube.’ Moreover, Miss L. had the absolute privilege to enjoy a spectacular private firework, which was the peak of the evening. That’s when Mister M. proposed the love of his life. Of course; she said yes! Then, we escorted them inside the Castle for some pictures with the angel dancers in the incredible interior of the Castle. 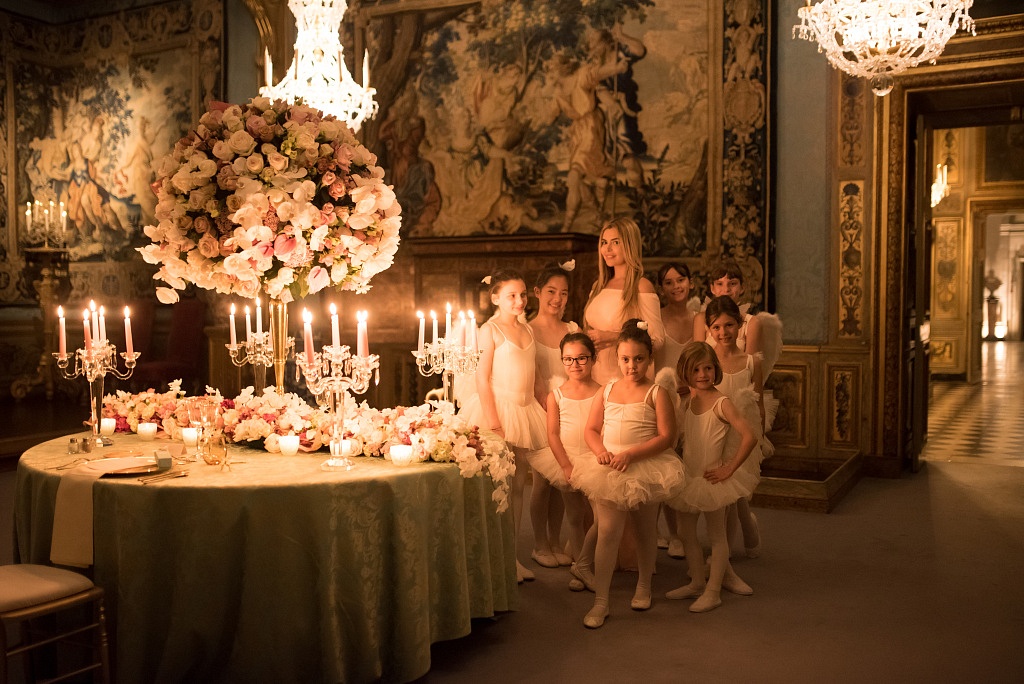 But, there was some more magic waiting for the beautiful couple. We set up a magnificent table scape in the middle of the ‘Salon des Muses’, with Giant Floral Center Piece, Floral Runner, and lots of gold props. Jean Charles, AKA Mister Sumptuous, the artistic director & founder at Sumptuous Events, delivered a hand calligrapher certificate of engagement by the owner of the castle.  They enjoyed peacefully a very sophisticated 5-course dinner.

Finally, at the end of the night, the French Fanfare escorted the couple to the exit of the Castle, and the Rolls Royces drove them back to Paris. It was a night that all of us would remember for years to come!

7 things to do Once you are Engaged

How did you spend your valentine’s day this year ? If you were to ask me why I love this  day so much, the answer would be easy : LOVE is what life is all […]

There is quite a lot of advice on the internet on how to find a good destination wedding photographer and we are always happy to suggest the top vendors to our clients !  I have noticed that […]